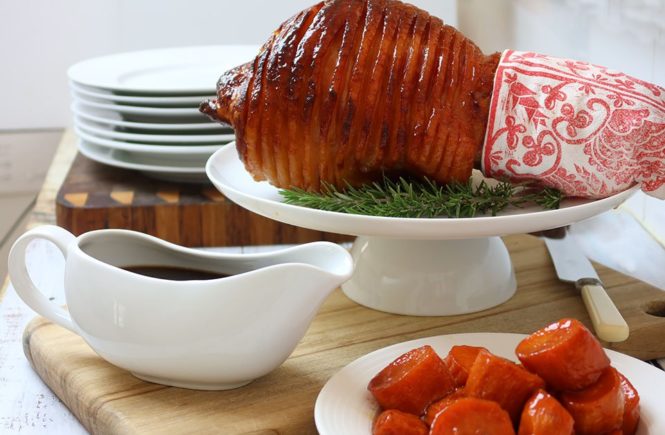 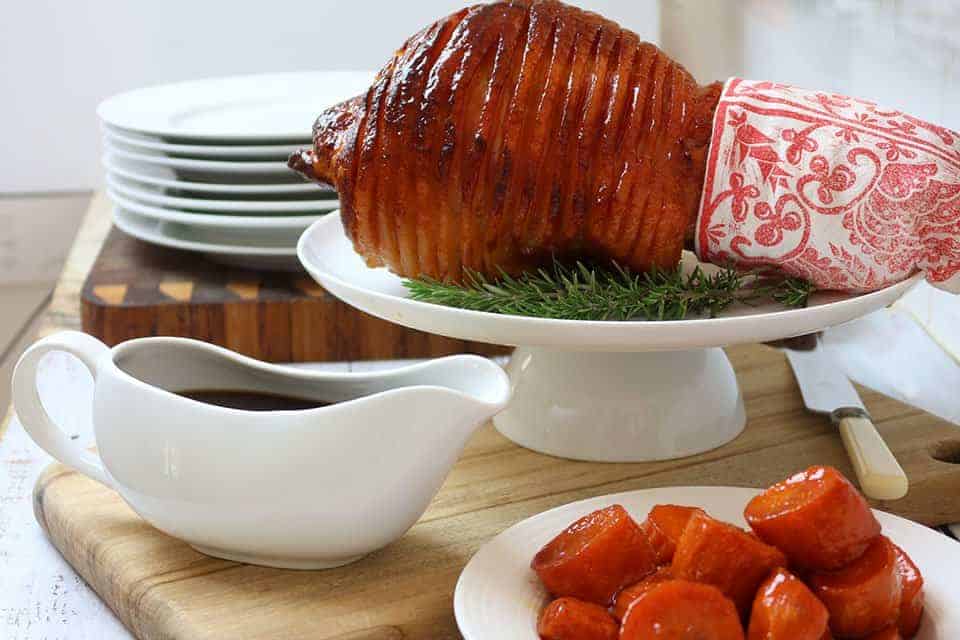 Festive pineapple glazed ham is going to shine as the star of your Thanksgiving, Christmas table. You’ll be amazed how a few simple ingredients turns into the most delicious sweet, sticky glaze that pairs beautifully with ham.

Pineapple juice, sweet sherry, brown sugar, dijon mustard and powdered cloves combine to make this our most popular recipe to glaze a baked ham with for the holidays for the past 25 years.

The ham and candied sweet potatoes always, always get lots of glowing reviews.

The original recipe was by the then doyenne of Australian cooking, Joan Campbell, who was food editor for Vogue publications and cookbooks. 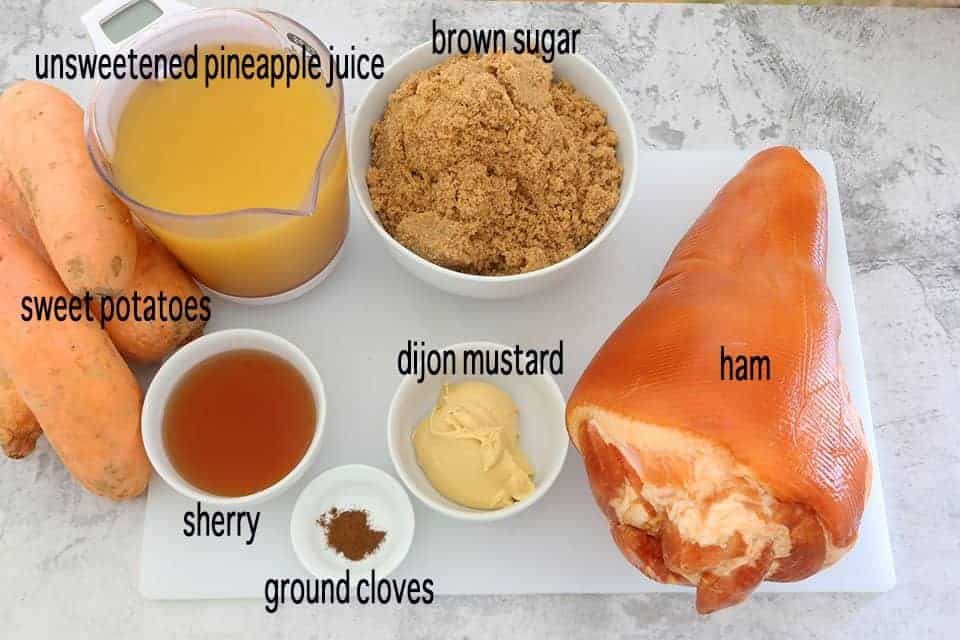 We found that the top went too dark so we incorporate the dijon mustard and cloves into the liquid.

Sadly, Joan has long passed but her delicious recipes continue to be a part of our lives.

We love to serve baked ham for a crowd as its super easy, absolutely delicious and virtually hands free apart from basting a number of times.

Glazed ham is just about a must for making over Christmas and the holiday season, and perfect for serving at your Easter table.

If you’ve never baked a whole leg or shoulder of ham before this recipe is going to bowl you over with it’s simplicity.

First up you select the size of your ham, depending on how many you’d like to serve and work out your cooking time – see cooking time below

Next up you’ll need to skin the ham to expose the fat. This is simply done by inserting a small sharp knife along the edge of the rind/skin, then working as close to the rind as possible proceed to separate the rind from the fat. When you have enough skin lifted, insert your fingers between the skin and  fat and gently slide your fingers to peel back the skin and leave a layer of fat. Check out the video below.

Take a sharp knife and slice through (score) the fat across the ham about 1 1/4cm (1/2 inch) apart to make a pattern in the fat, this allows the glaze to penetrate to the flesh and looks wonderful once the ham is baked.

Pop the ham, fat side up into a large baking tin

Make your glaze by whisking the pineapple juice, sherry, brown sugar, dijon mustard and powdered cloves into a large pot.

After the first 15 minutes remove the ham from the oven and baste with some of the glaze and return the ham to the oven.

Continue cooking, basting every 20 minutes or so until the last half hour – ( if your ham is small as ours was it will not have had enough time to form a deep rich colour, so follow this step). Now turn the oven up to 190c (375f) and baste every 10 minutes. Keep a close eye on the ham to make sure the glaze doesn’t start to burn. You are looking for a mouth watering deep golden colour.

Remove the ham from the oven and cover with foil. Reduce the remaining glaze till it is slightly syrupy and serve with the ham. That’s it.

A definite must for us serving with the ham are candied sweet potatoes, they soak up the glaze, and are absolutely delicious as they’re soft, caramelised, and sweet.

Peel and slice sweet potatoes into 2 1/2cm (1 inch ) slices. Pop them into your baking tray around the ham and baste frequently with the glaze. Allow 11/2 hours to cook the sweet potatoes, so if you have a large ham requiring a lengthy cooking time adjust when you put the sweet potatoes in so they will be cooked when the ham has finished cooking.

If you don’t have enough room in the ham pan to add all of your potatoes simply pop them into a separate baking dish with some of the excess glaze.

Pre-cooked hams only need to be heated and the rule of thumb is 15 minutes for every 500g (1 pound). Obviously if you are only cooking a small piece of ham you’ll need to turn the oven up to get the fat and glaze to turn golden brown because of the shorter heating time.

How many will my ham serve

When buying a ham, estimate the size needed according to the number of servings the type of ham should yield: Based on the ham being the only meat being served, obviously if you have a selection of meats you can reduce the quantity required accordingly.

We would love to hear from you in the comments below when you make this festive pineapple glazed ham.

Festive pineapple glazed ham is going to shine as the star of your Christmas table. You'll be amazed how a few simple ingredients turns into the most delicious sweet, sticky glaze that pairs beautifully with ham. 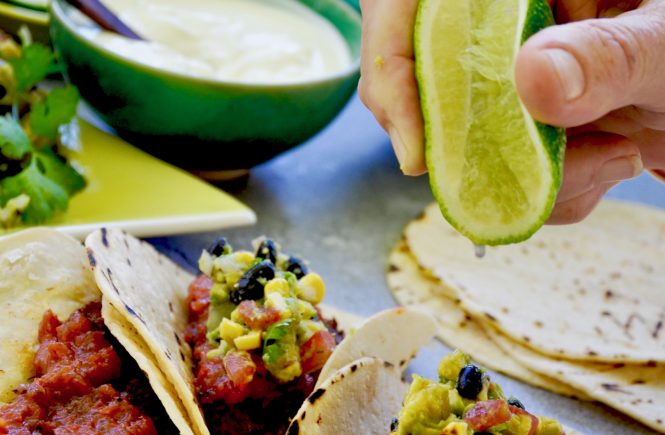 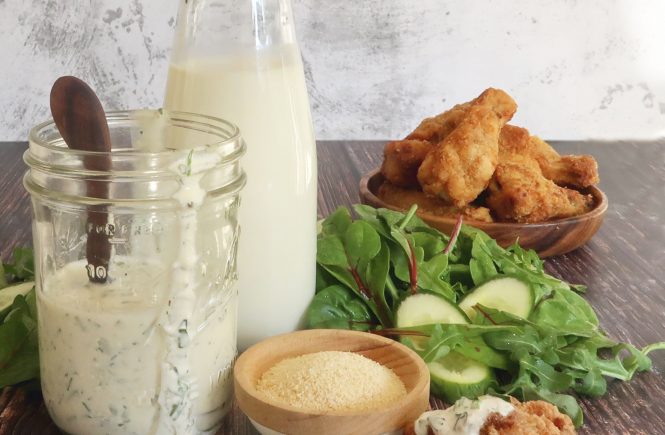 Sign up to receive delicious recipes right in your inbox!